New year, new book! My next novel comes out in two weeks. It’s a completely different genre, so I’m using a pen name.

1 — Paige Turner
Get it? A possibility, but I wanted to publish as a man to stand out in a field ubiquitously female.

2 — Robert Galbraith
Worked for J.K. Rowling, right? Well it worked after someone “accidentally” “leaked” the name.

3 — Leinad Nameloc (or Leonard Namelock)
My name backward, but I didn’t like the looks of it.

and is set in a fictional fire department in Park City, Utah. It comes out January 17. It’s available for pre-order on Amazon now! 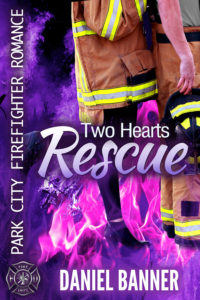 Two Hearts Rescue is one book in a series I’ve written with 3 bestselling authors: Christine Kersey, Taylor Hart, and Cami Checketts. Two of the books are out now:

Cami Checketts’ book, Rescued by Love, is coming out Feb 1.

Here’s hoping it’s a banner year for you and me!